In the past, LEDs can only be used as the status indicator. The heat dissipation of the package has never been a problem. However, in recent years, the brightness and power of LEDs have been actively improved, and they have been used in applications such as backlighting and electronic lighting. The problem has quietly emerged. The above-mentioned teachings sounded a bit confusing, did not always emphasize the brightness of LEDs? In 2003, Lumileds Lighting company Roland Haitz based on an empirical technique inferred from past observations. Starting from the first commercial LED in 1965, in the development of these 30 years, LEDs are about every 18 months. It can double the brightness in 24 months, and in the next 10 years, the brightness can be increased by 20 times, and the cost will be reduced to 1/10 of the existing one. This is also the Haitz law that has been popular in recent years. It is considered to be the Moore law of the LED industry.

According to Haitz's law, LEDs with a brightness of 100 lm/W (100 lumens per watt) were in 2008; they appeared in 2010, but the actual development seems to be more advanced than the law. Nichia Chemical Industry (Nichia, June 2006) ) Engineering samples of up to 100lm/W white LEDs have been available and are expected to be officially put into mass production by the end of the year. 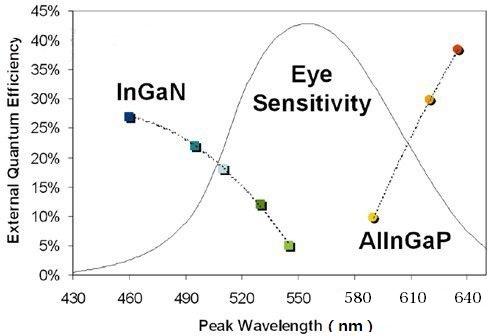 A small number of high-brightness, multiple and dense arrangements are the main cause of heat increase

First of all, in the past, it was only used as the LED of the indicator light. The current of each single (light conduction) is between 5mA and 30mA, typically 20mA, and now the high power LED (Note 1), That is, each single will have 330mA, 1A of current, and "each power" is increased by ten times, even dozens of times (Note 2).

ã€€ã€€ Note 1: In the practice of existing high-power LEDs, in addition to increasing the area of â€‹â€‹single-emitting bare crystals, there are also practices in which multiple bare crystals are packaged together. In fact, some white LEDs are three kinds of bare crystals of red, green and blue in the same package to mix white light.

Note 2: Although the lighting (sudden conduction) voltages of various LEDs are different, this difference is temporarily ignored here.

When the multiplied current is sent in the same single package, the heat will naturally double, so the heat dissipation will certainly deteriorate, but unfortunately, because the white LED is used as the flash of the camera phone, it is used for small lighting. It is not enough to use a light bulb to make a lighting bulb inside the projector. It is not enough to use high brightness, and high power is used. At this time, heat dissipation becomes a problem. The above LED application method uses only a few high-power LEDs, about 1~4 flashes, 1~8 illumination bulbs, and more than 10 projectors, but the flash has less chance of use and the lighting time is not long. A single lighting bulb has a relatively large space for cooling around, but the projector does not have ample cooling space, but can be equipped with a cooling fan.

In the figure, the semiconductor materials for InGaN and AlInGaP LEDs, the external quantization efficiency map at each peak wavelength (light color), although ideally can approach 40%, but if the light extraction efficiency is taken into consideration, In fact, they are all between 15% and 25%. What's more, the higher efficiency of the two materials is not within the scope of human eye sensitivity, only 20% under the category. However, there are still many applications that require high brightness. However, it is necessary to densely arrange high-brightness LEDs, such as traffic lights, message billboards, and TV walls made up of LED groups. The result of dense arrangement is that it is not easy to dissipate heat, which is caused by the application. cooling problem. What's more, in the backlight of LCD TVs, it is not only the use of high-brightness LEDs, but also densely arranged, and in order to pay attention to the short and light, the heat dissipation design space available on the back is more limited, and should not be considered if the requirements of high standards are met. Use a cooling fan, because the noise of the fan will affect the taste of TV viewing.

What are the side effects of the heat dissipation problem?

Bare layer: divergent source of light and heat on both sides: pn junction

Regarding the heat dissipation of LEDs, we also discuss them from the core to the outside, and the head is also in the pn junction. The solution is to convert electrical energy into light energy as much as possible, and less into heat energy, that is, light energy boost. The heat is reduced to reduce fever. If we discuss it further, the electro-optic conversion efficiency is the internal quantum efficiency (IQE). Today, it is generally 70%~90%. The real sticking point is the external quantum efficiency (External Quantum Efficiency; EQE) is low. Taking Lumileds Lighting's Luxeon series LED as an example, the junction temperature of Tj is 25 Â°C, and the forward drive current is 350 mA. Thus, with InGaN, the efficiency is about 5%~27 with different wavelength (light color). Between %, the higher the wavelength, the lower the efficiency (the grass green is only 5%, the blue is 27%), and the AlInGaP aspect also varies with the wavelength, but the higher the wavelength, the higher the efficiency, and the efficiency is generally from 8 %~40% (light yellow is low, orange red is highest). 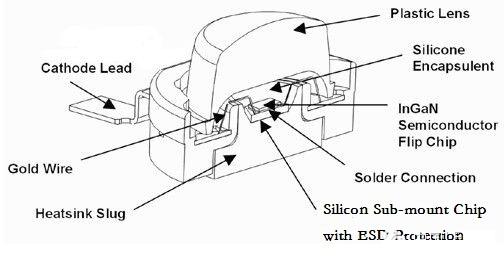 From the cross-section of Lumileds' Luxeon series of LEDs, it can be known that the silicon sealant fixes the phosphor on the bare and bare LEDs (if fluorescent is useful), then the lens is on the seal, and below the bare crystal Solder (or thermal paste) is connected to the Silicon Sub-mount Chip. This chip also enhances the ESD's ESD protection. The heat sink is connected to the bottom and some of the LEDs are directly connected to the heat sink. 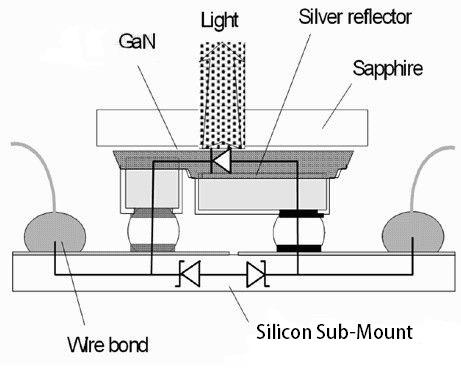 Lumileds' Luxeon series of LEDs are flip-chip mounted, so the sapphire substrate becomes at the upper end, and a layer of silver is added as a light-reflecting layer to increase the amount of light extraction. In addition, two layers are produced in the Silicon Submount. A Zener Diode makes the LEDs stable and makes the operation more stable. Since increasing the extraction efficiency (also known as: twilight efficiency, light extraction efficiency) is equivalent to reducing the heat dissipation rate, it is equal to two sides of a subject.

How to increase heat dissipation at the bare crystal level, changing the material and geometry is once again a necessary means. The two most commonly used methods are: 1. Substrate, also called: backplane, substrate, and some places. Called: Carrier) material. 2. Mounting is performed by die-cutting (Flip-Chip, also called: inverted crystal). First, the substrate part is explained. The material of the substrate is not changed, and must be matched with the bare crystal material. The substrate materials commonly used in the existing AlGaInP are GaAs and Si, and the InGaN is SiC and Sapphire (and using AlN). As a buffer layer).

In order to enhance the heat dissipation of LEDs, the past FR4 printed circuit boards have not been able to cope with them. Therefore, a printed circuit board with a metal core, called MCPCB, is proposed, which uses a more thermally conductive metal such as aluminum or copper to accelerate heat dissipation. However, due to the characteristics of the insulating layer, heat conduction is limited. For light, the substrate is not transparent enough to block light, or a reflective material layer is added between the light-emitting layer and the substrate to prevent the "light energy" from being obstructed and absorbed by the substrate, resulting in waste. For example, the GaAs substrate is opaque, so a DBR (Distributed Bragg Reflector) reflective layer is added for reflection. The Sapphire substrate can be directly reflective, or the transparent GaP substrate can transmit light.

In addition, the substrate material must also have good thermal conductivity, which is responsible for quickly transferring the heat released by the bare crystal to the lower heat sink (Heat Slug), but the heat conduction between the substrate and the heat sink block must also be good. The interface, such as solder or thermal paste. At the same time, the epoxy resin or silicone resin above the bare crystal (that is, the sealing layer) must also have a certain heat resistance, so that the temperature is transmitted from the pn junction to the surface of the bare crystal. In addition to strengthening the substrate, another method is flip-chip inlay, which turns the bare crystal electrode in the past to the lower side, and the electrode directly communicates with the bottom wire foil, so that the heat can be transmitted to the lower side faster. Not only is the method used on LEDs, but today's hot CPUs and GPUs have long used this to speed up heat dissipation.

However, MCPCB also has some limitations. It should not exceed 140 Â°C when the circuit system is operating. This is mainly due to the characteristic limitation of the Dielectric Layer (Insulated Layer). In addition, it must not exceed 250 Â°C during the manufacturing process. , 300 Â° C, this must be known before the tin furnace.

ã€€ã€€ Note: Although aluminum and copper are suitable thermal and thermal conductive metals, most of the cost is aluminum.

Although the MCPCB has better heat dissipation than the FR4 PCB, the dielectric layer of the MCPCB does not have a very good thermal conductivity. It is roughly the same as the FR4 PCB, and only 0.3W/mK, which becomes the conduction bottleneck between the heat sink and the metal core board. In order to improve this situation, the manufacturer has proposed an improvement method of IMS (Insulated l Substrate), which directly bonds the polymer insulating layer and the copper foil circuit to the aluminum and copper plates in an epoxy manner, and then arranges the LEDs in the LED. On the insulating substrate, the thermal conductivity of the insulating substrate is relatively high, reaching 1.1; 2W/mK, which is 3; 7 times higher than the previous one. Furthermore, if the insulating layer is still considered to have poor thermal conductivity, there is also a heat sink directly on the bottom of the LED, which is directly in contact with the core metal through a through hole on the printed circuit board. Accelerate heat dissipation. This practice is very intriguing, because the past printed circuit boards were not chiseled for the soldering of the plug-in components, but were cut for the path of the wires, but now they are designed for heat dissipation.

In addition to the MCPCB, MCPCB+IMS method, a ceramic substrate (Ceramic Substrate), a so-called Direct Copper Bonded Substrate (DBC), or a metal composite substrate has also been proposed. Both the ceramic substrate and the direct copper bonded substrate have a high conductivity of 24~170W/mK, and the direct copper bonded substrate allows the process temperature and operating temperature to reach 800 Â°C or above, but these technologies are subject to further maturity observation.

Easy installation and removal make the LED decoration lamps could be cyclic used. And the maintenance and repairment is not a hard work also. Just enjoy the beautiful effect.