The digital design and evaluation methods used in this study under laboratory conditions are shown in Flowchart 1.

The equipment used in this experiment is shown in Figure 2, as shown in Table 1.

This experiment was carried out in the "Multi-function Laboratory for Light Color Measurement and Subjective Evaluation" of the Institute of Building Technology of the School of Architecture of Tianjin University. The experimental area is about 35m2, and the black curtain and black ceiling that can be automatically raised and lowered around it form a closed dark room.

The selected 20 experimental samples were regularly thrown out by the plasma TV in full screen. The subjects sat at about 1.62m from the TV screen and used the selected scale to have five levels of semantics at a viewing angle of about 35Â°. The difference method describes the physical stimuli presented one by one, and the experimental scene is shown in Figure 3.

3 Analysis and discussion of experimental results

According to the statistical analysis of the experimental data, the alpha coefficient of the scale reliability is shown in Table 3.

It can be seen from Table 3 that the scores of the Creenbacher alpha coefficient of the 20 samples are greater than 0.7, indicating that the overall sample of the experiment has good internal consistency and reliability, the sample selection is meaningful, and the experiment is reliable. .

A statistical method of two-sided test using Pearson's product difference correlation coefficient r was used to analyze the influence of gender, profession and regional differences on sample sentiment from the overall sentiment evaluation.

Correlation test analysis showed that the overall evaluation of 20 samples in different genders (male and female), different majors (architectural and non-architectural), different regions (North China and East China), correlation at 21 emotional scales The level of significance was reached and showed a high degree of correlation, indicating that gender, professional, and regional differences had no effect on the overall evaluation of emotions. 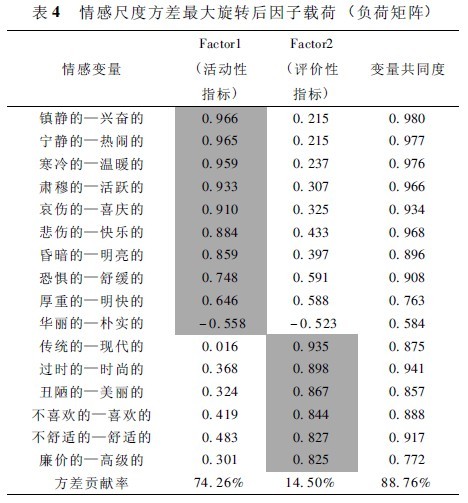 Table 4 shows that the variables of the affective factors have a high degree of commonality, indicating that the emotional variables can be well explained by two common factors (activity, activity, and evaluation). The cumulative contribution rate of variance reached 88.76%. Therefore, the factor extraction result is ideal.

In order to clearly reflect the relationship between emotional variables and affective factors, 20 samples were ranked in descending order according to the average and the mean of the per capita score weights. Positive samples indicate that the sample dominates emotions as positive emotions in the emotional scale, such as â€œwarmâ€, â€œunpretentiousâ€, â€œlivelyâ€, etc.; in the positive emotion sample, most of them are from high-pressure sodium (yellow) projection, It can be inferred that the effect of light source color on emotion is greater than the influence of material on emotion. Negative values â€‹â€‹represent the leading emotions that are triggered by negative emotions such as â€œcoldâ€, â€œgorgeousâ€, â€œsupremeâ€ and so on.