Imagine how to use wireless network

For friends who often live in cities, Internet services may have become an indispensable part of everyone's life. However, there are still two-thirds of people in the world, because of forests, islands or high mountains and other terrain, can not use fast and stable network connection, so Google launched a project called "Project Loon", as previously reported, Google is planning to use high-altitude balloons to build huge mobile communication networks in remote areas around the world.

Google's "Project Loon" is one of the plans of the Google X Lab, which provides fast and stable Wi-Fi network access to people in designated areas through multiple hot air balloons.

According to "Connect" magazine reports, like Google's driverless car project, Project Loon has already started a long time ago, and it may have been nearly two years. Google also said that at present they have established a system to send hot air balloons carrying various computers and electronic devices to an altitude of 60,000 feet, to provide remote areas with the equivalent of the current 3G network or faster network connection.

According to the official introduction, the pilot test of "Project Loon" will be the first to be launched in the South Island of New Zealand this month. It is reported that Google has launched 30 hot air balloons this week, and it is expected that experiments will be carried out in more regions in the future. 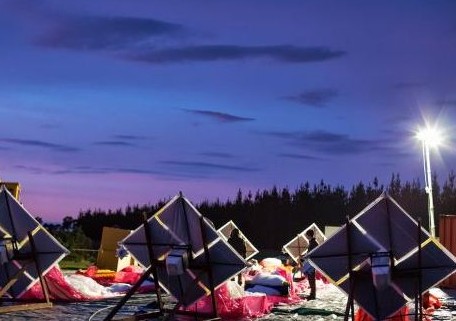 Charles Nimmo, a farmer in New Zealand's small town, did not expect that his company, accompanied by a flock of sheep, would one day access the Internet via a hot air balloon.

About a month ago, Nemo received a mysterious call. After signing the confidentiality agreement, Nemo and other 49 talents knew that Google's "Queen Bird Project" had come to the door.

At that time, Google technicians installed a basketball-sized bright red receiver in their home, shaped like a marked icon of Google Maps.

It didn't take long for Nemo to become the first user in the world to successfully connect to the "Hot Air Balloon Network" after the crew released a series of translucent hot air balloons that resembled jellyfish.

Following the tradition of local farmers, Nemo â€™s first thing after surfing the Internet is to open a Google page to check the weather to decide whether to shear sheep for the day. Although the hot air balloon stayed only 15 minutes above Nemo's house, he was very excited. "The speed and quality of hot-air balloon network access is much better than the dial-up copper wire network I use."

The "Bloodbird Project" that uses hot air balloons to "spread" wireless network signals is another imagination born in Google X Labs. At present, about two-thirds of people on the planet still cannot access the Internet. Google hopes to use hot air balloons to provide cheap Internet services to rural, remote, and underdeveloped areas.

However, this "hot-air balloon network" still faces doubts about its operability and stability. Telecom analyst Xiang Ligang told the "First Financial Daily" that how to effectively ensure the continuity of network signals is the balloon hanging in the sky, which is a big test for Google's hot air balloon, and another test is how to ensure Continuous power supply.

Google's hot air balloons have a mystery, and the equipment hanging below includes: radio receivers, computers, height control equipment and solar panels. The balloon will fly in the stratosphere 20 kilometers or more from the ground, and will exchange signals with network sites on the ground. These signals will "bounce" all the way and be transmitted between the balloons.

According to Google's official statement, each hot air balloon can float in the stratosphere for 100 days. During the flight from west to east, it can provide wireless Internet service for a 40-kilometer-diameter area, covering an area of â€‹â€‹about 1256 square kilometers, exceeding the entire Hong Kong. The area is not affected by the terrain.

The material of these hot air balloons is polyethylene foam used in super-pressure balloons. They are more durable than meteorological balloons and can withstand higher pressures. After inflation, they are 12 meters high and 15 meters wide. At the same time, there is a parachute on the top, which can control the balloon to take off and land for maintenance and replacement. The electronic equipment on the balloon is powered by a solar panel, and it takes 4 hours to fully charge the electricity needed for a day.

This experiment is still in its early stages. The reason for choosing New Zealand as the starting place is largely because New Zealand is a country with a large rural population. It may be difficult to lay traditional fiber optic networks to meet local needs.

Take Nemo as an example. He gave up dial-up network and switched to satellite network 4 years ago, but later found himself unable to afford the Internet fee of more than 1,000 dollars per month.

"I'm almost ready to turn off the Internet access at home and prepare to work in the town, but the arrival of Google's project may significantly change the lives of many New Zealanders." Nemo said.

If this plan succeeds, it will benefit not only users like Nimo who are in developed countries but still have trouble accessing the Internet, but also those who are far away from mountain villages, deserts, or underdeveloped areas.

In addition, after the strong earthquake in Christchurch, New Zealand in 2011, the fact that most of the communications infrastructure was damaged is still fresh in our memory. Google predicts that a similar "hot air balloon network" is expected to play an important role in post-disaster reconstruction in the future. This is one of the reasons why New Zealand was chosen as the experimental site.

According to the plan, the first 30 balloons to be launched will fly from the west of New Zealand to the east, and 50 New Zealand residents who have installed special receivers in their homes will participate in the experiment.

Since then, more balloons will be released, passing through Chile, Argentina, South Africa, Australia, and the same latitude countries in the southern hemisphere, forming a ring of hot air balloons.

Google ultimately intends to launch thousands of hot air balloons to the stratosphere, using the "hot air balloon network" around the world to provide services to the 4.8 billion people without a network worldwide.

"Internet services are difficult to access in many parts of the world," said Richard DeVaul, chief technology manager of Google X Labs. "Although we can now reach the sub-Saharan region by satellite phone, this It does not mean that people there can also enjoy cheap and efficient Internet services. "

Dvor said that if the plan is successful, then countries will be able to save a lot of money for laying cables and optical fiber, and establishing communications infrastructure.

For such a fledgling project, Google said that it is too early to talk about commercialization. But in the industry's opinion, the reason why Google, which started with search, invested heavily in the construction of network infrastructure services, its purpose is still to build its own ecosystem, involving new microprocessors, low-cost smartphones, Android operating systems and other chain .

In fact, some foreign media reported in May this year that Google will assist in the construction of wireless networks in sub-Saharan Africa and Southeast Asia, including the use of high-altitude communication platforms (such as special balloons and soft small spacecraft) to transmit signals. Export low-cost mobile phones to these regions.

It is worth mentioning that, because the spectrum of the wireless signal transmitted by the "Hot Air Balloon Network" does not require authorization, Google does not need to face the complicated application process and regulatory procedures.

The Transient Voltage Suppressor (TVS) is a high-performance protection device in the form of a diode. When the two poles of a Tvs Diode are subjected to a reverse transient high-energy shock, it can change the high impedance between the two poles to a low impedance at a speed of the order of 10 minus 12 powers, absorbing up to several kilowatts of surge power. The voltage between the two poles is clamped to a predetermined value, effectively protecting the precision components in the electronic circuit from various surge pulses.