The reason why wafer loading is called "flip-chip" is compared to the traditional wire bonding method (WireBonding) and post-balling process. Conventionally, the electronic surface of the wafer connected to the substrate by metal wire bonding is facing upward, and the electrical surface of the flip chip is facing downward, which is equivalent to turning the former over, so it is called "flip-chip".

The essence of flip chip is that on the basis of the traditional process, when the light-emitting area and the electrode area of â€‹â€‹the chip are not designed in the same plane, the electrode area is mounted toward the bottom of the lamp cup, and the process of soldering the wire can be omitted. However, the precision of the process of solid crystal is high, and it is generally difficult to achieve a high yield. 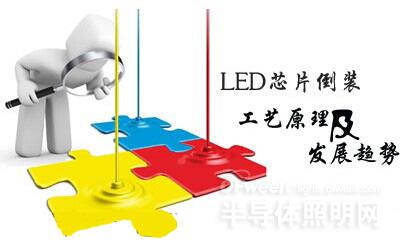 The required conditions for flip chip:

1 The substrate material is silicon; 2 electrical surface and solder bump are on the lower surface of the component; 3 after the substrate is assembled, an underfill is required.

The advantages of flip chip compared to traditional processes:

A GaN-based LED structure layer is grown on the sapphire substrate by MOCVD technology, and light emitted from the P/N junction light-emitting region is emitted through the upper P-type region. Due to the poor conductivity of P-type GaN, in order to obtain good current expansion, a metal electrode layer composed of Ni-Au is formed on the surface of the P region by evaporation. The lead of the P region is taken up through the metal film of the layer. To achieve good current spreading, the Ni-Au metal electrode layer should not be too thin. For this reason, the luminous efficiency of the device is greatly affected, and it is usually necessary to take into account both the current expansion and the light extraction efficiency. However, in any case, the presence of the metal film always deteriorates the light transmission performance. In addition, the presence of wire bond pads also affects the light extraction efficiency of the device. The structure using GaN LED flip chip can fundamentally eliminate the above problem.

In recent years, countries around the world such as European countries, the United States, Japan, South Korea and China have implemented LED lighting related projects. Among them, the â€œTen Cities and Ten Thousand Milesâ€ program promoted by China is the most eye-catching. Street lamps are an indispensable part of urban lighting. Traditional street lamps usually use high-pressure sodium lamps or metal halide lamps. The biggest characteristic of these two sources is that the arc tube is small in size, can produce a large light output, and has high light efficiency. . However, such light sources are used in road lamps. Only about 40% of the light passes directly through the glass cover to the road surface, and 60% of the light is reflected by the lamp reflector and then emitted from the lamp. Therefore, there are basically two shortcomings in the traditional lamps. One is that the illumination in the direct illumination direction is very high, and the secondary road can reach 50Lx or more. This area is obviously over-illuminated, and the illumination at the intersection of the two lamps is only It is 20%-40% of the illumination at the center of the lamp, and the light distribution uniformity is low. Second, the reflector efficiency of such lamps is generally only 50%-60%, so there is a large amount of light loss during the reflection process, so The traditional high-pressure sodium lamp or metal halide lamp street lamp has an overall efficiency of 70-80%, low uniformity, and excessive waste of illumination. In addition, high-pressure sodium lamps and metal halide lamps usually have a service life of less than 6000 hours and a color rendering index of less than 30; LEDs have significant advantages such as high efficiency, energy saving, long life (50,000 hours), environmental protection, and high color rendering index (>75). How to effectively apply LED to road lighting has become the hottest topic for LED and street lamp manufacturers. Generally speaking, according to the use environment of the street lamp, there are strict requirements on the optical design, life support, dustproof and waterproof capability, heat dissipation treatment, and light effect of the LED. As the core of LED street light, the manufacturing technology of LED chip and the corresponding packaging technology jointly determine the future application prospect of LED in the field of lighting.

The improvement of the luminous efficiency of LED chips determines the energy-saving ability of LED street lamps in the future. With the development of epitaxial growth technology and multi-quantum well structure, the internal quantum efficiency of epitaxial wafers has been greatly improved. How to meet the standard of street lamp usage depends largely on how to extract the most light from the chip with the least amount of power. Simply put, it is to reduce the driving Voltage and increase the light intensity. LED chips of traditional dressing structure generally need to be coated with a translucent conductive layer on p-GaN to make the current distribution more uniform, and this conductive layer will partially absorb the light emitted by the LED, and the p electrode will block part of the light. Light, this limits the light extraction efficiency of the LED chip. The flip-chip LED chip can not only avoid the problem of light absorption and electrode pad shading on the conductive layer of the P electrode, but also guide the downward light by providing a low-ohmic contact reflective layer on the p-GaN surface. Up, this can simultaneously reduce the drive voltage and increase the light intensity. (See Figure 1.) On the other hand, the patterned sapphire substrate (PSS) technology and chip surface roughening technology can also increase the light extraction efficiency of the LED chip by more than 50%. The PSS structure is mainly to reduce the total light reflection efficiency of the photons in the device, and the chip surface roughening technology can reduce the light loss reflected at the interface when the light is emitted from the inside of the chip to the outside of the chip. At present, the LED chip adopts flip-chip structure and graphic technology. After 1W power chip white light package, the light efficiency is up to 134lm/W at 5000K color temperature.

18650 protected batteries have an electronic circuit.

The circuit is embedded in the cell packaging (battery casing) that protects the cell from [over charge", heat or [over discharge", over current and short circuit.